Wadim K. grew up in Germany, attended school, served as altar boy and took music lessons. He spoke German, had German friends, felt that he was German. But Wadim never received a German passport because he came to Hamburg with his family as a refugee.

1992. With the collapse of the Soviet Union, Wadim’s ethnic Russian parents don’t feel safe anymore in Latvia. But their application for asylum in Germany is rejected. 13 years in limbo between “tolerated” status, collective housing centers and bans on working ensue. The parents break down under the pressure and become seriously ill from depression. The children are left more and more to fend for themselves.

2005. The German alien registration authority tries to deport the family, the nighttime operation ends in disaster: the mother slits her wrists, the father is taken into custody. At the age of 18, Wadim is deported to Latvia all alone – to a country he can barely remember. For 5 years he struggles to set up a new existence there. On his last illegal visit to Hamburg in January 2010, Wadim leaps in front of an incoming metro train. He is 23 years old.

The feature-length documentary WADIM pieces together the mosaic of a brief life that stands for tens of thousands of other human beings who live in Germany with nothing more than a “tolerated” status. The film pointedly displays how people have to struggle in order to find a place for themselves in this country. In light of the debate on integration in Germany, it triggers thoughts which revolve around burning issues: Where does a person belong? What does homeland mean? And is it justified to take that home away from someone by law? 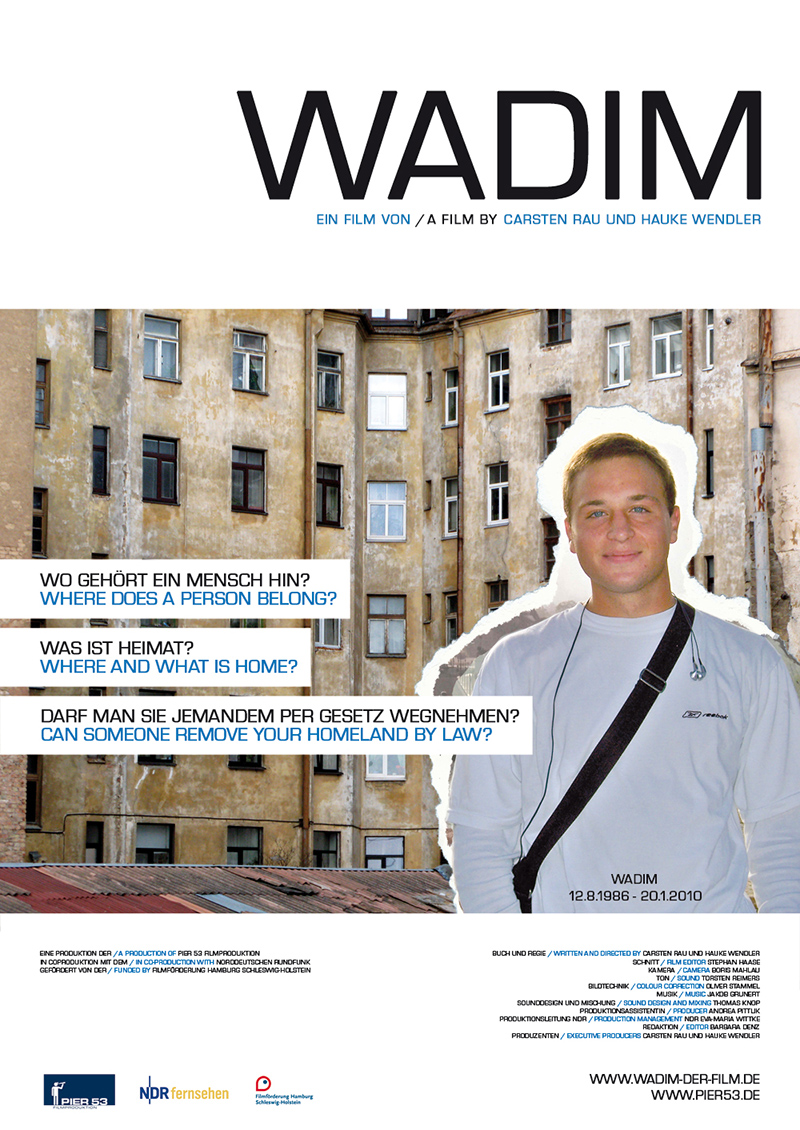 “Pleasantly appealing is not how WADIM, a documentary film by Carsten Rau and Hauke Wendler, comes across. It’s cracked and chapped, like varnish flaking off our welfare state. (…) The authors have held trial against the state and its hierarchy of authorities based on circumstantial evidence. Their evidence includes letters, records, declarations and statements given by lawyers, friends, teachers and social workers. (…) At the end, our state and its hierarchy of authorities are clearly found guilty of inhumanity.”
(Fritz Pleitgen, FAZ)

“Carsten Rau and Hauke Wendler narrate their film with a great deal of intensity and lots of feeling for moods and atmosphere. (…) At times, the blunt candor displayed, for example the way Wadim’s parents speak in front of the camera, is almost frightening.”
(Kathrin Streckenbach, dpa)

“The camera joins the parents as they erect a blue wooden cross at the site where their son threw himself in front of the train. It is agonizing to have to bear witness to their despondency, yet the film doesn’t come to a stop with this torment. Because the story of the suicide told by WADIM is equally a tale about how Europe coalesced following the end of the Eastern bloc.”
(Christoph Twickel, Spiegel Online)

“The film shifts the focus to what otherwise often disappears from the screen. It is a moving object lesson on asylum and political policy toward foreigners, on homeland and isolation.”
(Karolin Jacquemain, Hamburger Abendblatt)

“Wendler and Rau refrain from an off-screen narrator and let parents, friends and companions do the talking instead, reinforced by numerous family videos and photos. As a result they come remarkably close to Wadim while always maintaining a respectful distance and never craving sensationalism.”
(Constantin Binder, Neue Osnabrücker Zeitung)

“This documentary is like a hard-hitting punch.”
(Sven Sakowitz, taz)

“An unsettling and absolutely thought-provoking film by Carsten Rau and Hauke Wendler, who had been nominated for the 43rd Grimme Prize in 2007 for ‛ABGETAUCHT’.”
(Grimme Institute, Marl)

“The authors hold back entirely in terms of trite avowals of dismay or showy finger-pointing, they refrain from any off-screen commentary. Instead, and with all discernible empathy, they matter-of-factly reconstruct Wadim’s path leading to the fatal catastrophe. (…) Essentially, this was a feature-length piece that really ought to have been aired in a prime-time slot on the ARD network, a piece that made it evident where the true qualities of public service broadcasting lie.”
(Reinhard Lüke, Funk Korrespondenz)

“A commentary from the brother runs during the closing credits. He had supported the film but didn’t want to appear in it. Though his words are addressed to the directors, he hits the viewer deep down inside: ‛You’re not going to change any laws or the radical policy toward foreigners in Hamburg with your film. You will arouse compassion for a moment until people go back to thinking of themselves again.’ ”
(Ulrike Mau, Berliner Morgenpost)

How did it come about that you ended up making this film?

Hauke Wendler: Wadim’s story is anything but one you choose because it’s the kind of film you’ve always wanted to make. With a subject like this, it’s more like it “descends upon” authors and directors. In February 2010, two weeks after Wadim committed suicide, the family’s attorney, Markus Prottung, made contact with us because he knew one of our older films. I met with him and we talked for two hours. Ever since then Wadim’s tragedy won’t let go of us. It goes far beyond everything we’ve produced as the authors of nearly 50 documentaries and features.

Carsten Rau: In the years that’ve gone by we already realized several production projects on the issues of fleeing and migration. The films were invited to festivals and received a number of awards, too. In each of those films we accompanied people during extreme situations in their lives. But none of them had the tragic scope that marked Wadim’s life from so early on.

How did the work on the film take shape?

Hauke Wendler: For a long time we didn’t have the slightest idea how we were supposed to finance the film. We received quite a few rejections from commissioning networks’ editorial desks. It came down to: Oh my, another film about refugees, people don’t want to see them anymore. But we still had to get started with shooting because certain developments and stories just won’t let themselves be postponed: the funeral, the deep pit that Wadim’s parents fell into afterwards, the attempt to find a way out again – we had to accompany all of that with the camera. So we started shooting without any funding. It wasn’t until the NDR network and Filmförderung Hamburg Schleswig-Holstein, a North German film funding entity, got on board that we knew: OK, we have the financial side covered, too. And that’s when the actual work took off.

Carsten Rau: The shooting and post-production for the film took their time, almost two years. I’m talking about work that above all demanded a great deal from Wadim’s family and friends. That’s why we’d like to take this opportunity to thank them all once again: for the strength it cost them, particularly the parents, Viktoria und Sergei K., to film with us for months on end while exposing themselves to their own recollections and responsibility over and over again.

Hauke Wendler: It goes without saying that this film doesn’t undo anything that happened. Which is why we hope all the more so that it still retains an impact. That as many people as possible take notice of what Wadim and his family were subjected to in their lives. Especially because their story stands for roughly 90,000 other refugees who live in the limbo classified as “tolerated” status in Germany.

How are Wadim’s parents doing these days?

Hauke Wendler: Viktoria, Wadim’s mother, was only 48 years old when she died on January 8, 2014, just about four years after Wadim’s death. It’s always terrible when a person passes away, but when the person dies after having such an awful life, the thought of that alone is really grim. On the other hand, after Wadim’s suicide all that was left for Viktoria was to agonize her way through a life of despondency, reproaches and feelings of guilt each and every day. At the end she was too weak to fight back against a severe illness. With Viktoria, another human being has died whose death is not going to crop up in any public statistics on fleeing and migration because the consequences of this inhumane policy toward asylum in Germany are being repressed. It’s crucial that this has to change.

Carsten Rau: Our thoughts are with the survivors: with Viktoria’s husband Sergei, who is now being housed in a home for the mentally ill, and with her younger son Georg.

in co-production with
Norddeutscher Rundfunk